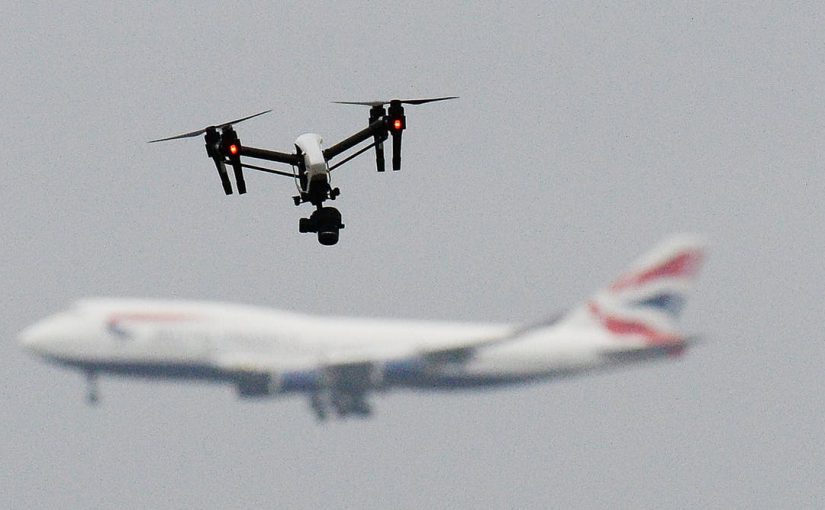 Namely the absurdity that the erroneous Gatwick Airport drone sightings have become.

(Am i that kind of person, to exploit such misfortune? Maybe I am, maybe I’m not, you’ll have to buy my books to find out!)

In my story Come Silent Winged Sleep (in my anthology Stories Of An Awkward Size), all sorts of UAV and RAV (Robot Aerial Vehicle) mischief is presented, but the story bears the physical threat of the devices as the main thrust.

The purely psychological aspect? OK. I’m going to have to get on that in future work.

In Brooker’s truly horrible (horribly brilliant) instalment, Metalhead, it is strongly implied the devices were conceived as a terror weapon, not just a genocidal infiltration system. Thus now that they are operating beyond their original programme, their threat is even scarier than it might have been anyway.

But now it turns out, household “drones” are enough to do the psychological part of the job. Especially when they stand a chance of getting sucked into a jet-turbine engine and destroying it, possibly along with the occupants of the attached vehicle.

I can be smug. I’m not the only one, there are a few of us, who in our stories included warnings about the future of UAV/RAV combat.

I conceived Come Silent Winged Sleep many years ago, but finally published it in 2014. It still was only taken seriously by a few.

But the thing is, there were much earlier stories that said small, autonomous robot weaponry was always going to run amok.

Philip K. Dick’s “Swords” in Second Variety (filmed as the grotesquely under-rated movie Screamers) were already an ungoverned-battlefield threat, long before he got to the Artificial Intelligence meat of his message.

So it seems we have arrived and … oh yes, I was talking about being smug.

How about some solutions, hmm, Jon?

Well, we already have regulations. Much good may they do. In Australia, CASA, the Civil Aviation Safety Authority, publishes a wise set of rules – that are Federal law – about where civilian UAVs and RAVs can be flown. They even have an app to help you if you’re going for a fly of your xmas pressie!

But drones are just too useful. Even factoring the errant law-abiding citizen (and the idiot) aside, the things are going to get manufactured offline. No registration involved. They are, and are going to continue to be, deployed beyond view, beyond hearing, in all sorts of surveillance roles. All sorts of planning roles.

All sorts of nuisance, sabotage, and assault roles.

They are a level, if lumpy, playing-field in a game that anyone can play. (Side note: people laugh at how incapable 3D-printing currently is. That laughter will go away soon.)

And they are annoyingly, dangerously hard to detect and track, as the Russian armed forces have been discovering in Syria.

The police forces of the near future are going to have to deploy hunter-killer RAVs of their own to bring down intruding drones. Fighting swarms with swarms, exactly as our immune system does.

Even civil aircraft are going to have to become “drone proof” to whatever extent they can.

It sounds absurd, but we’re there.

Stories Of An Awkward Size contains five “long stories” including Come Silent Winged Sleep. It covers many Slipstream and Hard Science Fiction subjects, and is available on Amazon and other outlets in a variety of formats.

(Featured Image from The Conversation)